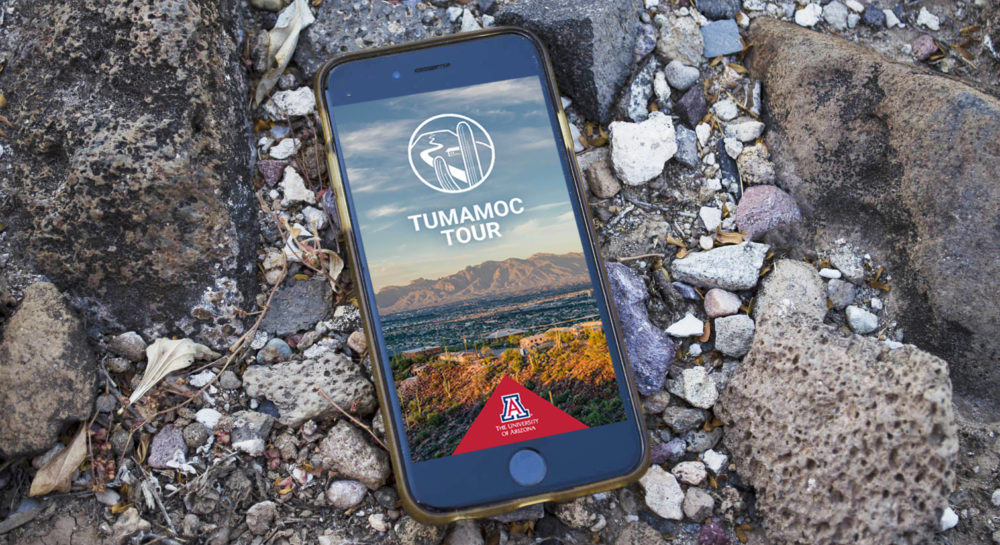 THE TUMAMOC TOUR is a mobile app that provides audio narration and visual site-interpretation for visitors walking the 3-mile route at the Tumamoc Hill Sonoran Desert ecological research preserve.

Increasing use of the hill by the public over a decade began to compete with the needs of working scientists. The University decided to allow public access. Insight revealed that visitors were actually an asset–they just needed to be educated about the history and ecology of the surrounding environment. Knowledge will inspire more visitors to respect the rules and become stewards of the place.

My role was UX designer, writer, illustrator, photographer, collaborating with a small team of writer/researchers, audio-visual artists, and scientists, led by the Hill director.

The College of Science accepted our proposal based on the following sketches. The sketchy nature of the art communicated that we were open to ideas and iteration. Some of the concepts shown here were shelved for a future version. 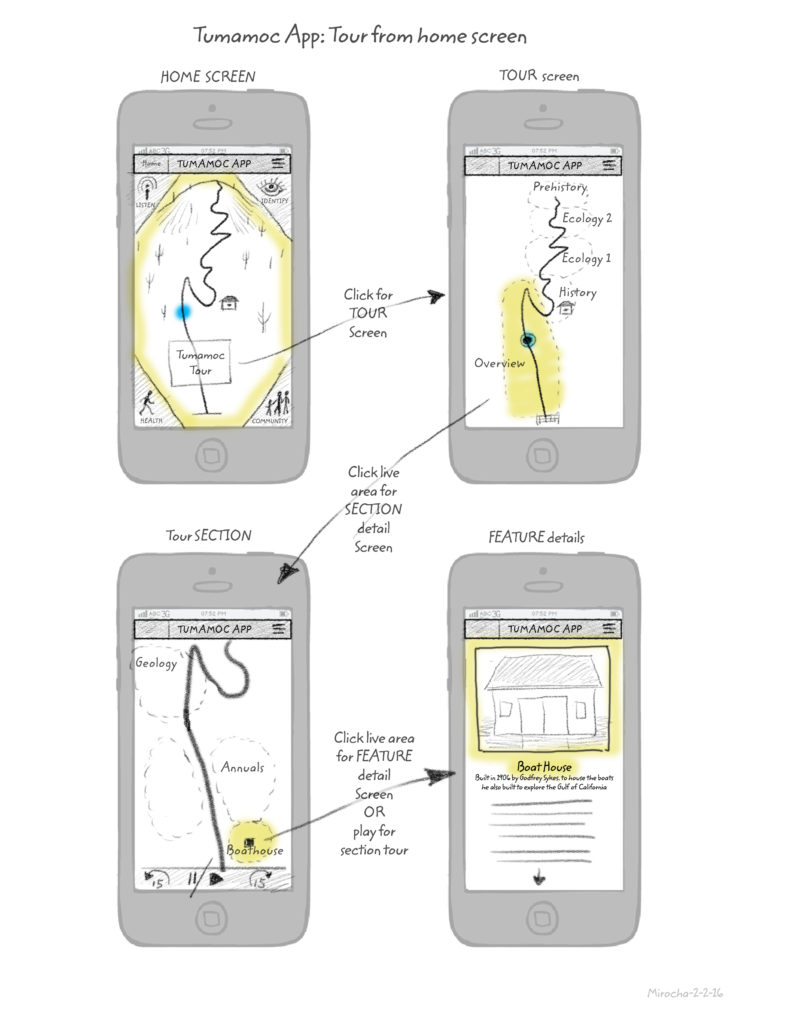 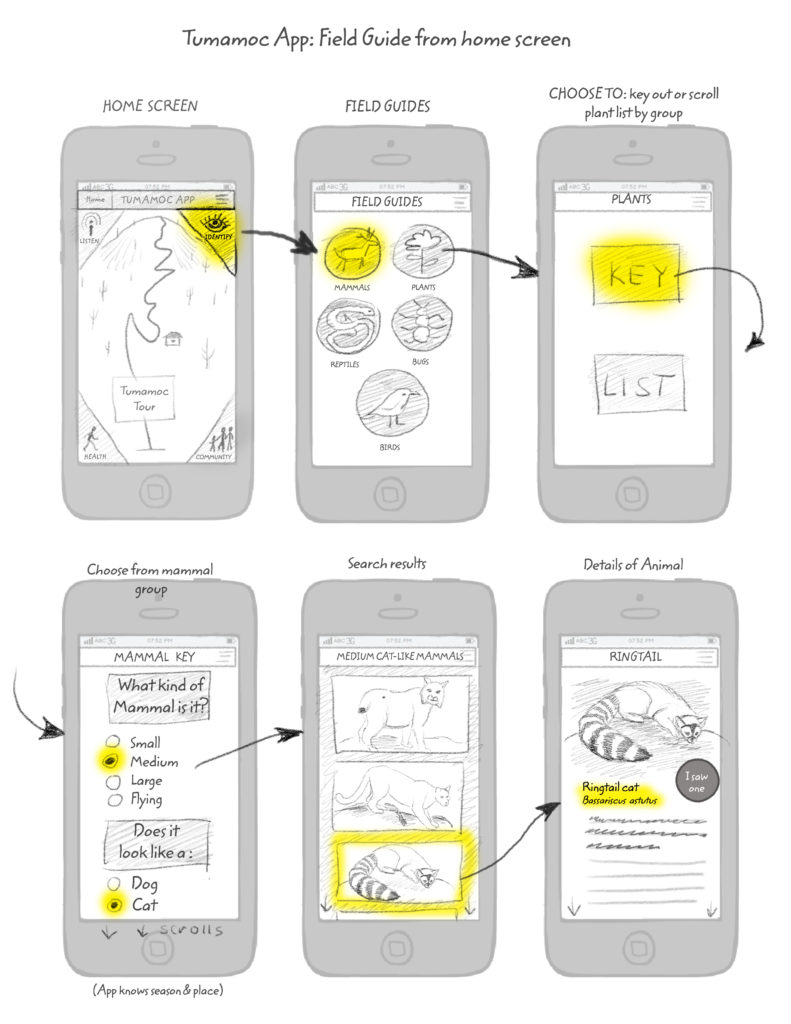 Educated visitors are more likely to respect the rules and become long-term community stewards of the site.

We asked these questions:

Should we do user research?

Although it’s a scientific research site, there was no time or budget for user research, and little or no understanding among stakeholders of UX design. They were scientists, used to being the experts, lecturing to others less knowledgeable. There was no point in trying to change that here. And to some degree they were right–they were experts and knew what they wanted to communicate about the place. UX would have to be quick and lean.

The College of Science decided to build the app, based largely on assumptions, and the success of a previous science app done for the nearby Catalina Mountain Highway.

Few visitors expressed a desire to be educated about the place. And scientists think very differently from site visitors. But, there were a few small areas were interests overlapped. That’s what we focused on.

People came for exercise and socializing, not to learn science.

Users will be outside on a mountain, usually in bright sunlight, making screens hard to see.

The average level of science education was low.

Our task was to turn challenges into strengths. To do this, we looked at the enthusiasm and sheer numbers of walkers, the fact that everyone carried phones, and common points of interest such as wildlife sightings.

Most walkers loved the place and made regular visits–Tumamoc was a hot spot to meet and a safe place to walk alone.

Most walkers carried their phone, and many attached headphones to their phone.

After compiling what we knew about the users of this app, I drew a quick concept map, which allowed us to see the big picture. By focusing content around easily visible things that visitors already wondered about, we could lead them into the more abstract subjects we wanted to convey.

Next, I started sketching out flow diagrams and shared them with the team. As these drawings got better, I did some secret paper prototyping with people who were available, to see if they knew what to do on each screen.

Early on, I got a 3d terrain model of the hill. This gave me the primary metaphor–location. The blue dot would move over the hill landscape with the GPS location of the walking person as they moved through the various sections, which tied in to the audio programs. Alas, my beautiful hill images were not to be. The developers either couldn’t or wouldn’t register my images as overlays to the underlying Google map. 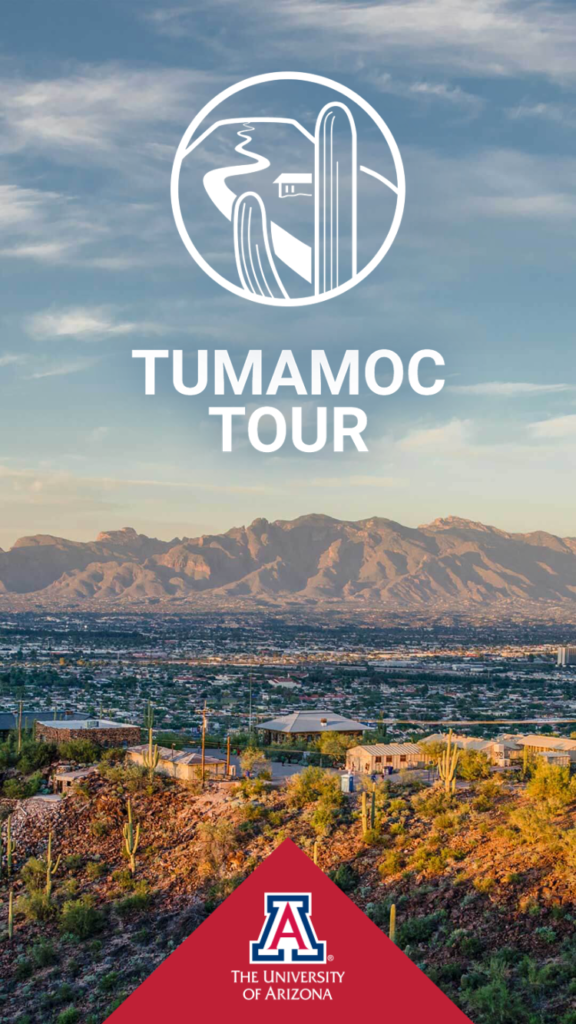 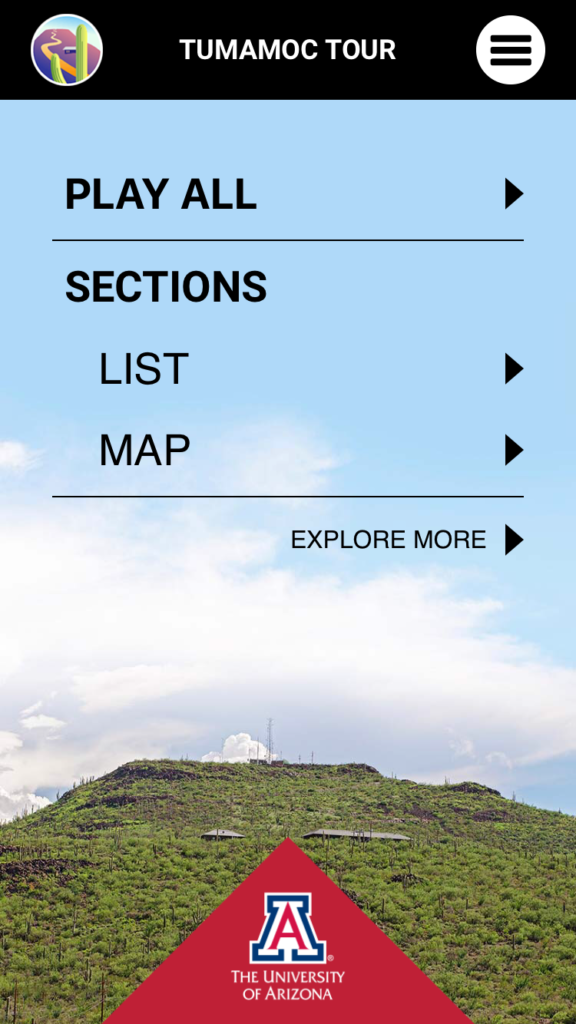 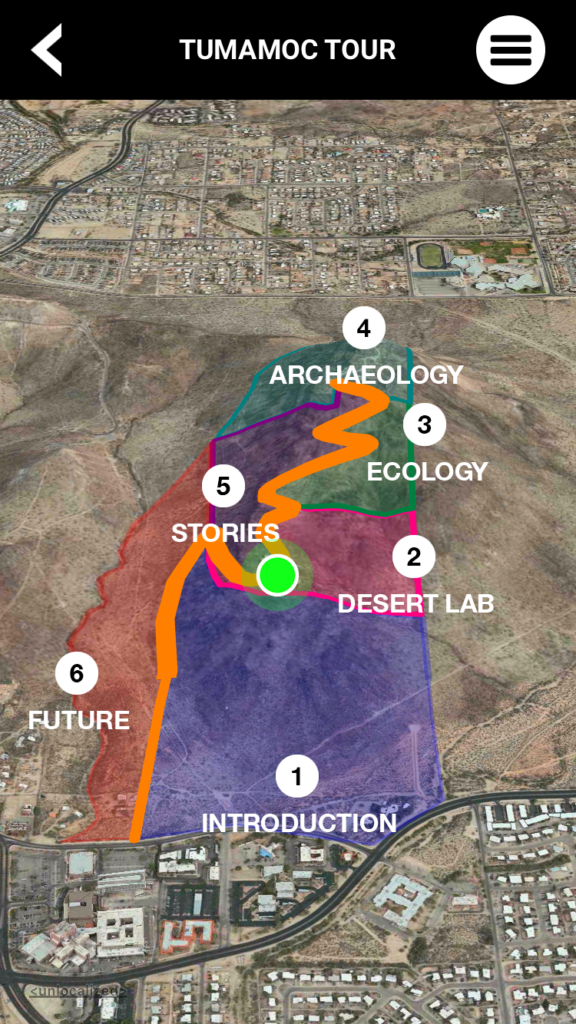 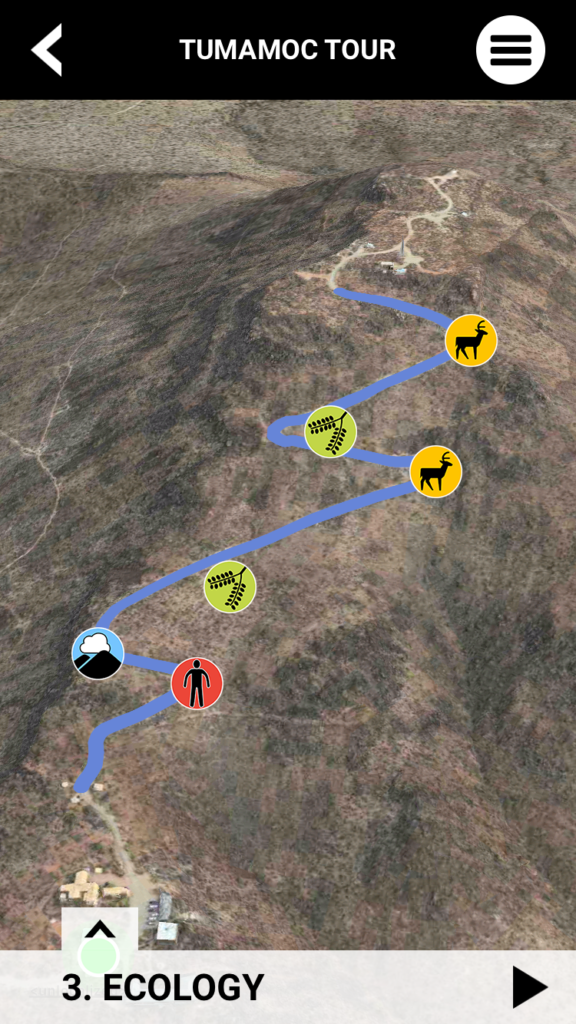 We had to make some compromises in the final development phase. The reasons for this are familiar: technical, budget, and time. These constrains caused the following issues.

Three months out, the number of users was lower than expected. We are watching the analytics, and observing people when possible.

One interesting observation I made personally: I saw couples listening together on speakerphone. That ties in with previous observations of the social nature of hill walkers. Even science is something to share and comment on, instead of experiencing it alone in individual headphones.

We really need to engage visitors with what they came to the hill for–exercise and socializing. In the next version we’ll do some design thinking and user research. — Tumamoc director 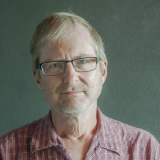